For a long time, we’ve wanted a way to set up generic questions on concepts that are used across many subjects, such as hypothesis testing or numeracy, and make it easy for teachers from different fields to copy them and make subject-appropriate changes without having to worry too much about how the rest of the question is set up. Our solution was to rejig the variable definitions tab in the question editor, so it now looks like this: 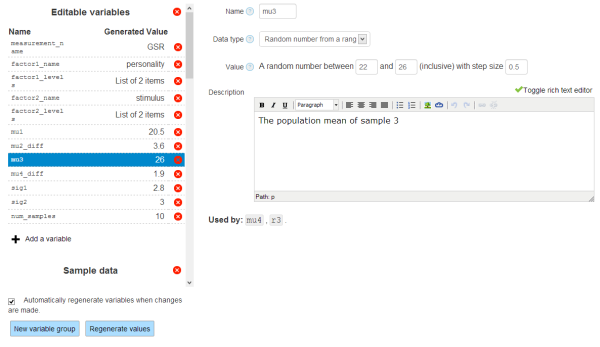 First of all, variables can now be grouped, so you can separate out all the variables you want teachers to edit. Next, you can specify the data type of a variable, so the editor provides a nicer interface instead of JME code. Each variable now has a description field, so you can give some hints about how to use it. Finally, there are lists of which variables the current variable depends on and is used by, to make it easier to backtrack a complicated calculation.

With all these changes, it’s now possible to set up a question where a teacher just needs to modify a few clearly labelled variables, and maybe reword the question prompts, without writing any LaTeX or JME code. I’ve written an example template question about a two-factor ANOVA test. The calculations involved in setting up and marking the question are really complex, but you can just change the names of the factors and parameters of the distributions they’re generated from, to get a customised version of the question with a full worked solution.

A while ago, we added JavaScript and CSS preambles to questions. This lets you add custom code to change the look of the question, or set up dynamic elements such as interactive graphs. Eventually we started using it to override the built-in marking algorithms. That was very powerful but a bit awkward, so I decided we needed a nicer interface to set up custom marking scripts. As a result, each part now has fields to define custom marking and validation scripts: 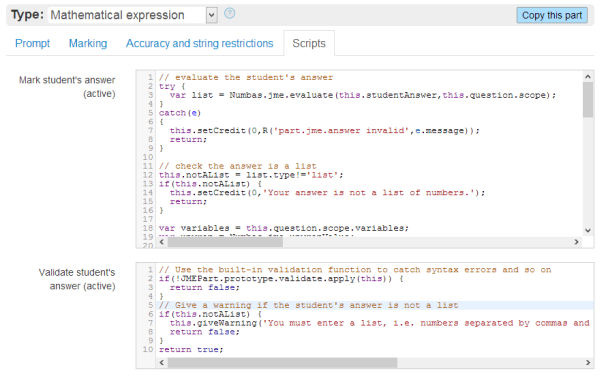 The marking script is run whenever the student clicks the “Submit answer” button. You can get their answer, do whatever you like with it, and then give the appropriate amount of credit, along with feedback messages.

The validation script runs after the marking script, and should be used to give warning messages when the student’s answer can’t be marked.

The marking scripts open up loads of new possibilities for question types. I’ve put together a few examples in an exam on the mathcentre editor; they do the following:

These are just a few examples of what you can do with marking scripts. Our next step is to work out which patterns come up most often, and provide convenience functions to make them easier to reuse, instead of writing lots of boilerplate code each time.

It’s been a while since I last posted about new Numbas releases, so here’s a list of other things that have changed since v1.5:

Gosh, what a lot of new stuff! And this isn’t the end: here’s a picture of Bill and me negotiating how many more features I need to implement this Summer. 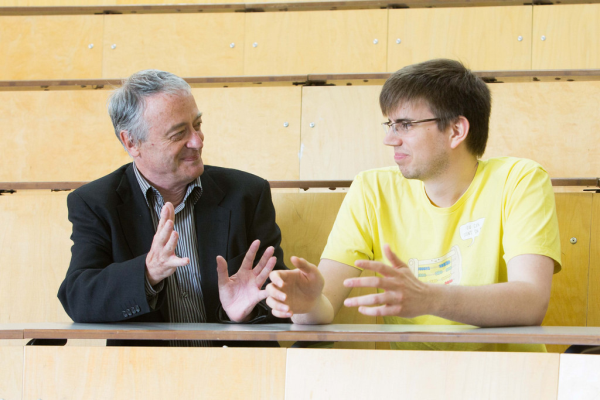 (Actually, that’s just the funniest photo of us taken by Darragh Kane at the workshop we delivered in Cork Institute of Technology last month)

As always, you can try out these new features on the free publicly-available editor hosted at mathcentre, or download the source code from our GitHub repositories.