Now, on to the editor!

We wanted to make it more obvious, for a novice question author, how to proceed through the editor to write a question.

The main tabs have been re-ordered to match the order you’d expect to write things – first you write a question statement; then set up parts where the student can enter their answer; define variables used to randomise the question; and finally write a worked solution.

The “settings” tab is now further down; the intention is that you’ll deal with it once you’ve actually written your question!

To really guide authors through the question-writing flow, the little pager at the bottom of each tab now give you some hints about what you should be doing, and then lights up the button to move to the next tab once you’ve done it.

The other aspect of the editor we’ve rearranged is the part editors.

When you first visit the “Parts” tab, you’re presented with a big button to add a part. This button is now a dropdown, so you select the part type first, before the editor appears.

We wanted to make it obvious which fields you need to fill in to get a workable question, and which are extra settings you can use to refine the behaviour of the part. Now the tabs you need to look at are separated visually from the less-important tabs, and the most important fields within each tab are also separated from the rest. In the ‘Marking’ tab, the fields you don’t have to change immediately are grouped under an “Advanced settings” header. 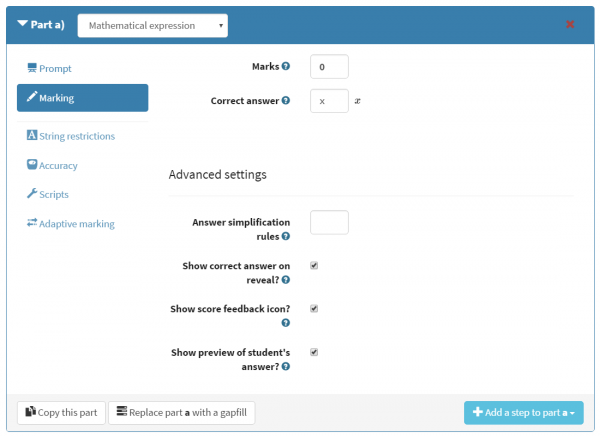 We’ve moved the “delete this question/exam” and “make a copy” buttons over to the left toolbar, so they’re not buried in the “Settings” tab. We’ve also moved the feedback dropdown to the header, combining it with the existing ‘stamp’ which shows the current feedback status. Now, all questions and exams begin in the “draft” state, and clicking on the stamp lets you choose a feedback stamp to apply. There’s also a line showing the publication status of the question/exam, as a little reminder to publish items when they’re ready. 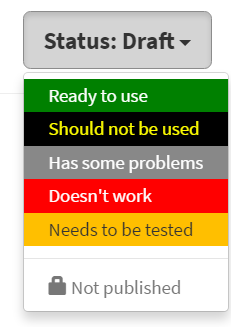 I hope that these changes increase your enjoyment of Numbas; if you have any comments or suggestions, we’d love to hear them at numbas@ncl.ac.uk.