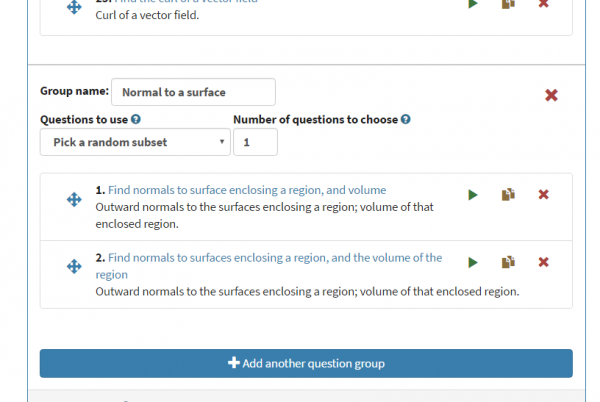 You can now separate the questions in an exam into groups, allowing you to pick a subset from each group at random. This feature was requested by Ione Loots at the University of Pretoria, who wanted a way of showing students a randomly-picked variation of each question in a test. (documentation, issue)

While rewriting the GeoGebra extension, I realised I needed a blank part which was worth marks but delegated the marking to an extension or custom marking script. So I added a new type called “Extension” which does just that.  (documentation) 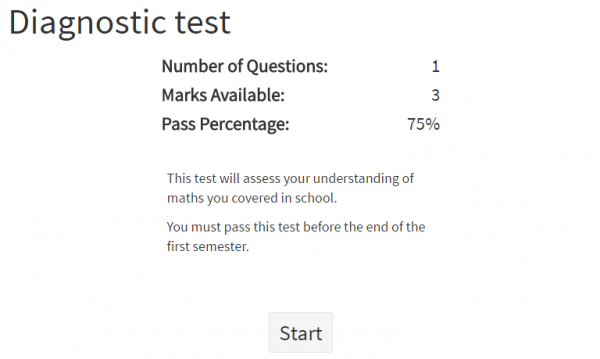 You can now write some text to be shown on the exam’s front page, and give a selection of texts to show to the student on the results page, based on their score. A couple of people asked for each of these – some people wanted to give some information about how the test would run to students before they begin, and some other people wanted to show a message directing students to a support service if they failed a test. (documentation)

While Numbas has always allowed its layout to be changed using themes, if you wanted to change some of the HTML on the page you had to override a single .html file, meaning that you could quickly get left behind as the default theme is updated with new features and bug fixes.

I’ve completely rewritten the way that themes work, so now index.html is created by rendering a collection of template files, using the popular jinja2 templating engine. This allows you to change individual sections of the layout, without affecting any others.  The XSLT file used to create the HTML for questions has also been split up the same way, so as well as it being easier to find the code relevant to what you want to do, you can make small changes without copying the whole template.

This is quite a technical change, but one that will make possible all sorts of new variations on how a Numbas exam is displayed.

While I was doing this, I took the opportunity to refactor the Python scripts which compile Numbas exams. It’s now a lot tidier, and they do say tidiness is next to godliness.

A theme aimed at schoolchildren 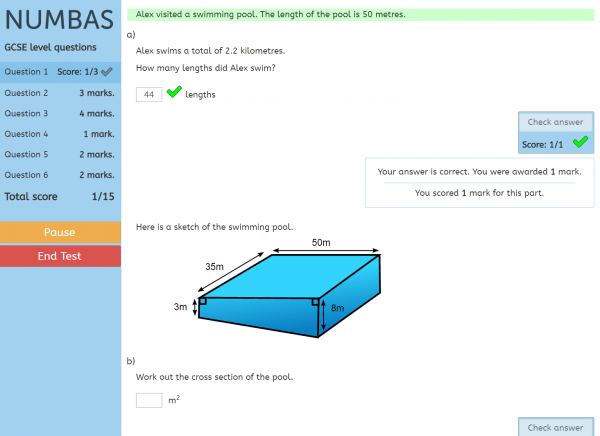 I’ve been thinking for a while about how Numbas would need to be adapted to make it more appropriate for use with younger students. The main problem I’ve got in mind is that younger students won’t know as many of the conventions of interfaces, and exams in particular, and would prefer a less formal register. Making everything a bit bigger will help students with less developed motor skills use the interface more easily.

I began by making a variant of the default theme. It has bigger text, in a typeface which is more friendly while maintaining legibility. I tried to do a bit of research about usability of interfaces for younger people, but didn’t find much concrete advice. I tried to add more colours to buttons, to signal more or less dangerous actions (for example, “end test” is in red because it’s irreversible). tick and cross icons are much bigger – I think kids will be more motivated to see this kind of feedback, compared to long text explanations. Finally, I changed a few bits of text – “submit part” is now “check answer”, for example.

I’ve made up a test with some questions on topics from the GCSE maths syllabus to try out these ideas. I’d really appreciate feedback on this – ideally, I’d like to have a theme for Numbas that I’m comfortable recommending to school teachers interested in the system.

Chris requested the ability to link the Numbas LTI provider to an editor instance, so we can provide a menu of ready-made exams for lecturers using Numbas for the first time, through our VLE. Doing this required setting up an API for external tools to retrieve data from the editor. It’s quite basic at the moment – it’ll show you information about published exams, and publicly-visible projects. 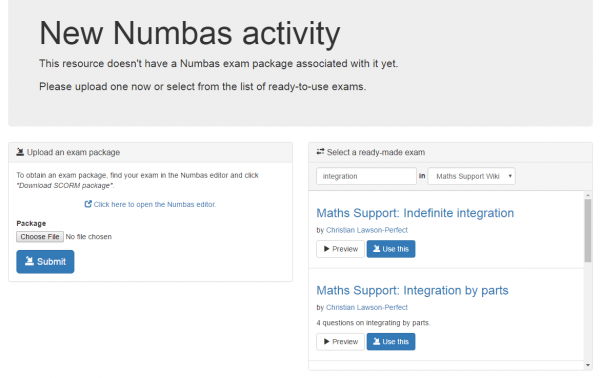 The API for the mathcentre is available at numbas.mathcentre.ac.uk/api. It’ll probably change a lot as more things are required of it. To appear through this API, a project has to be marked “visible to the public”, and questions or exams need to be published to the public database and labelled “Ready to use”.

Everything runs in Python 3

The Numbas editor has always run under Python 2, because the Django framework didn’t support Python 3 until a long time after we started. I just checked on Monday, and every package we use now works in Python 3, so I’ve updated the editor code and installation instructions to use Python 3 for both the compiler and editor. This makes setting up your own instance of the editor a lot simpler.

The editor is still compatible with Python 2, so you can carry on as you were if you already had your own instance running.